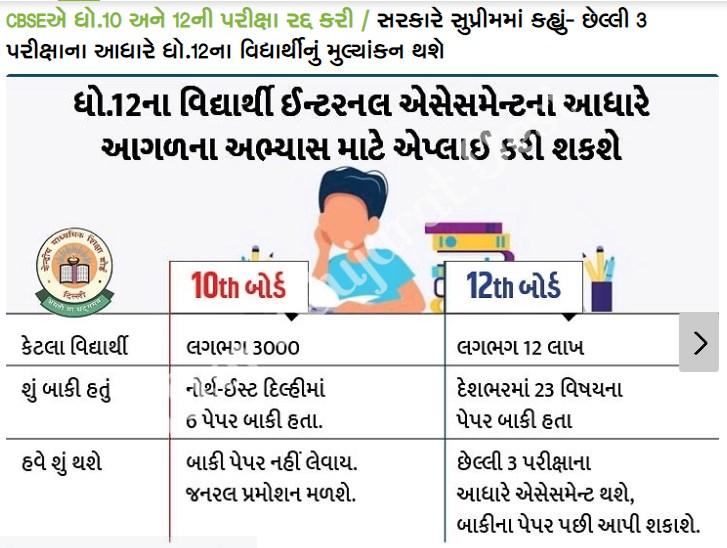 CBSE Std. Decided to cancel the remaining exams of 10th and 12th. The board made the disclosure during a hearing in the Supreme Court on Thursday. Students will now be assessed on the basis of the last 3 exams. The student will then have the option to take the exam.

Solicitor General Tushar Mehta told the Supreme Court that in the ICSE board, Std. 10 and 12 have decided to cancel the board exam. But they do not want to give students the option of giving papers after that.

What did the Supreme Court say?

• Currently given the option of giving internal assessment and then remaining papers.

તારીખ State the date of declaration of result.

કેન્દ્ર The Center clarifies the position on how the examination will be conducted in the State Board.

The Supreme Court will hear again at 10.30am on Friday.

What next after CBSE decision? What option does the student have?

The government has told the apex court that if children cannot submit their outstanding Std 10 and 12 papers, the assessment of such students will be based on their three-year examination under the new scheme.

The student can also choose to take the exam later, which will help him improve his result. The Solicitor General told the Supreme Court that if the situation improves, Std. 12 students will be able to submit their remaining papers. However, the apex court told the government that the prospects for improving the situation vary from state to state. Will the central government see it or the state government?

During the hearing, the Supreme Court asked when the new academic year would begin, it should be clear. If the exam is held in August, the academic year should start in September. In this regard, CBSE has stated that we will announce the result as soon as possible. It is hoped that the results will be announced this month. Students will be able to apply for admission based on the assessment.

29 subjects were left to be examined

• Examination of 29 subjects was pending. In North-East Delhi, Std. 6 subject examinations of 10 students were pending. The exam was canceled due to violence in Delhi.

• Std.12 examination was to be held between 1st to 15th July. There were 12 Std. 12 subject examinations pending across the country. In North East Delhi, in addition to these 12, 11 other major subjects were pending examination.

Earlier, a group of parents had filed a petition in the Supreme Court seeking cancellation of the CBSE exam. It was argued that the CBSE had earlier decided to cancel the exams in 250 schools abroad. The petition filed cited the example of Korona, a father of one child, who tested positive in Karnataka and 24 students had to be quarantined.

The three states do not want to take all the exams

In addition to the petition filed in the Supreme Court, the governments of Maharashtra, Delhi and Orissa had written to the Ministry of Human Resource Development asking that the examination should be canceled. Delhi Deputy Chief Minister Manish Sisodia said there was no space in the school at present for conducting examinations in Delhi.

A total of 29 subject examinations were pending

The status of these 3 exams is yet to be clarified

• ZEE Main – July 18 to July 23: Students qualify for ZEE Advance based on this exam. Admission to NIT, Government and Private Engineering Colleges is available through ZEE Main. It involves more than nine lakh students.

IT NIT-July 26: Admission in MBBS and BDS in government and private medical colleges is available through it.

• ZEE (Advance) -August 23: Only 2.5 lakh students qualify for Advance after ZEE Main. He gets admission in 23 IITs.

Challenge in front of students

1. Where admission is based on merit, what will happen?

• Ajoy Ghatak, a former professor and educationist at IIT Delhi, said the decision would not have a direct impact on the careers of students preparing for exams like ZEE, ZEE Advance and NIT, as the admission of these students is based on entrance exams.

They say that for those who are preparing for courses like BSc (Hons), BA (Hons) or Economics (Hons), there will be a challenge. Because most of the institutes give admission in this course on the basis of merit.

Professor Ghatak said that for example, in an institute like Delhi University, the cutoff increases every year. There is reaching 99% cut-off. If a student who has done Std. 12 this year has thought of taking admission in a college of DU, what will they do? That is a big question.

2. What will happen to those who are giving Std. 12 examination for the second time?

Adi Kushna, who is studying in 11th standard in Noida, said that now there will be trouble for students who had to decide their career direction based on marks. Who were already preparing for a competitive exam. They don’t matter much.

Please always Check and Confirm the above details with the official website and Advertisement / Notification.