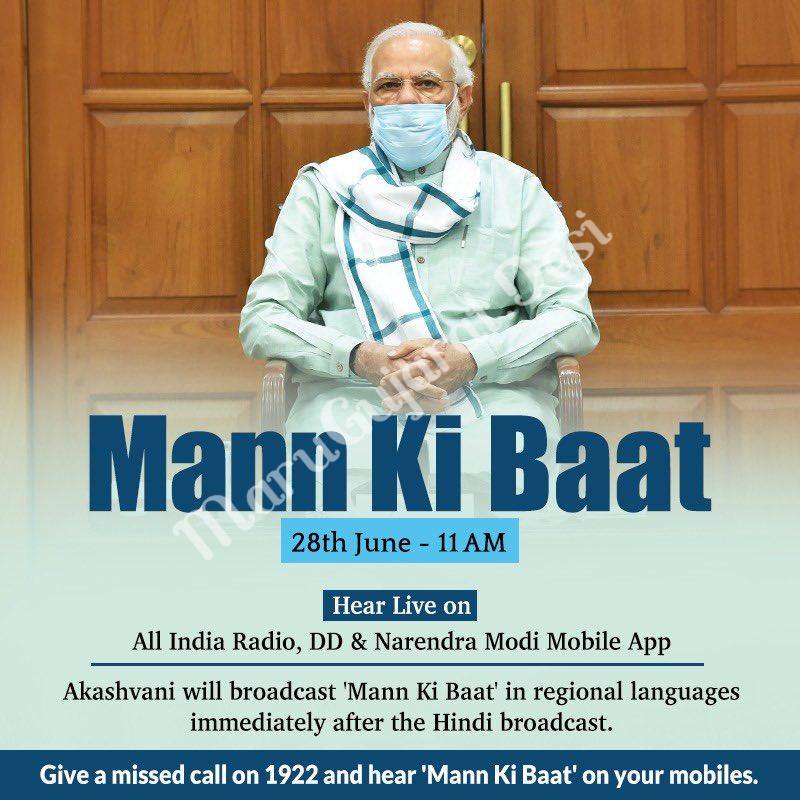 Prime Minister Narendra Modi will share his thoughts with the people in the country and abroad in his ‘Mann Ki Baat’ programme on All India Radio at 11 AM on Sunday.
It will be the 66th episode of the monthly radio programme.

It will be broadcast on the entire network of AIR and Doordarshan, AIR News website and on newsonair Mobile App.

It will also be streamed live on the YouTube channels of DD News, AIR, PMO and Information and Broadcasting Ministry.

The Prime Minister, Narendra Modi addresses the nation every month on All India Radio. Having officially started from 3 October 2014, the programme aims to deliver the Prime Minister’s voice and ideas to the general masses of India. Since television connection is still not available everywhere in India, especially in the isolated, rural and less developed regions, radio was chosen to be the medium for the programme, owing to its wider reach. An estimated 90% of the total Indian population is reachable over the medium.Doordarshan’s Direct to Home (DTH) service free dish relays feeds of the 20-minute-long episodes, to television and radio channels.

The first Mann Ki Baat programme was broadcast on the occasion of Vijayadashami on 3 October 2014 followed by the second broadcast on 2 November 2014.

In the first fifteen addresses of Mann ki Baat broadcast, more than 61,000 ideas were received on the website and 1.43 lakh audio recordings by listeners have been received. Each month, some selected calls become a part of the broadcast. From 2 June 2017, Mann Ki Baat will be available in regional dialects.The aim is to expand reach of the program as far as possible. The 50th episode of the program was broadcast on All India Radio on 25 November 2018