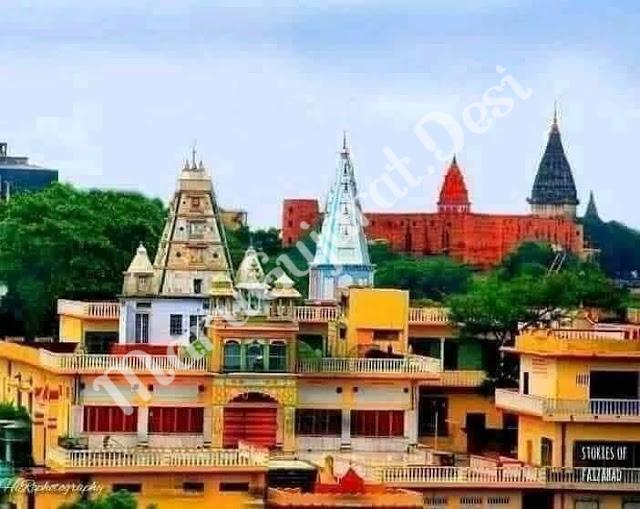 Paintings of Ramayana on Ayodhya, pools, and pillars painted in the colors of Rama. Before the arrival of PM Modi, Ayodhya was turned into a military camp
The city of Ram was decorated with yellow
Lucknow: A grand program of Bhumi Pujan of Ram Mandir is going to be held on 5th August in Ram Nagari Ayodhya. Following this program, a festive atmosphere has prevailed in Ayodhya town, but at the same time, tight security is being arranged.

The entire city of Ayodhya is eagerly awaiting Ramallah. Preparations are underway for the arrival of PM Modi on August 5 and the Bhumi Pujan program. For this, Ayodhya has now been decorated with yellow. Ayodhya is being decorated keeping in view the land worship.

Special arrangements for distribution of offering seven though only a limited number of people have been invited to the Bhumi Pujan of the Ram temple amidst the growing contagion of the coronavirus, the offerings are being prepared in abundance. For this, desi ghee ladvas are being prepared in various monasteries and akhadas of Ayodhya.

Desi ghee laddu prasad will be distributed in 1,11,000 steel cans here. These offerings will also be distributed to the devotees along with the guests.

Following the Bhoomi Pujan program, special security arrangements are being made for the security of Prime Minister Narendra Modi along with other preparations to decorate the Ram Nagri.

A team of Special Protection Group (SPG) has reached Ayodhya to monitor the security situation here and review the situation following the input of the terrorist attack. At the same time, special measures are being taken to prevent the transmission of the coronavirus.

In this regard, DIG of Ayodhya Deepak Kumar said that a meeting was held with all the agencies on the issue of security of the Prime Minister. Under the Kovid protocol, no more than 5 people will be allowed to gather at one place in Ayodhya on August 5. Apart from this, special arrangements have been made for the security of all VVIPs.

ATS snipers will be deployed on the terraces in Ayodhya. In addition, drone cameras will be used to keep a close eye. Apart from this, the police in civilian dress will be on high alert.

Before PM Modi’s arrival in Ayodhya on August 5, CM Yogi Adityanath will once again review the preparations on August 2. He will be accompanied by Deputy Chief Minister Dr Dinesh Sharma. Apart from meeting saints and mahatmas, CM and DyCM will also hold a meeting here on Prime Minister Modi’s security.

August 5 is going to be a historic day for millions of Ram devotees. On this day, the foundation stone of the Ram temple in Ayodhya will be laid by PM Modi and at the same time, the construction of the magnificent Ram temple will begin.

In Ayodhya, preparations are in full swing for this auspicious time. In Ayodhya, CM Yogi has appealed to celebrate Diwali from August 3 to 5.
According to the details received, due to the presence of PM Modi, a unique security system will be set up in Ayodhya.

The foundation stone of the Ram temple will be laid in Ghaziabad with 22 kg of silver bricks made by 122 traders, including three Muslim traders.

On this occasion the idols of Lord Rama as well as Lakshmana, Bharat, Shatrughan will be adorned with gem-studded attire. This attire will be green in color.

There is a 32 second moment for Bhumi Pujan and in the meantime, PM Modi will perform Bhumi Pujan. Ram tune is being played by applying.